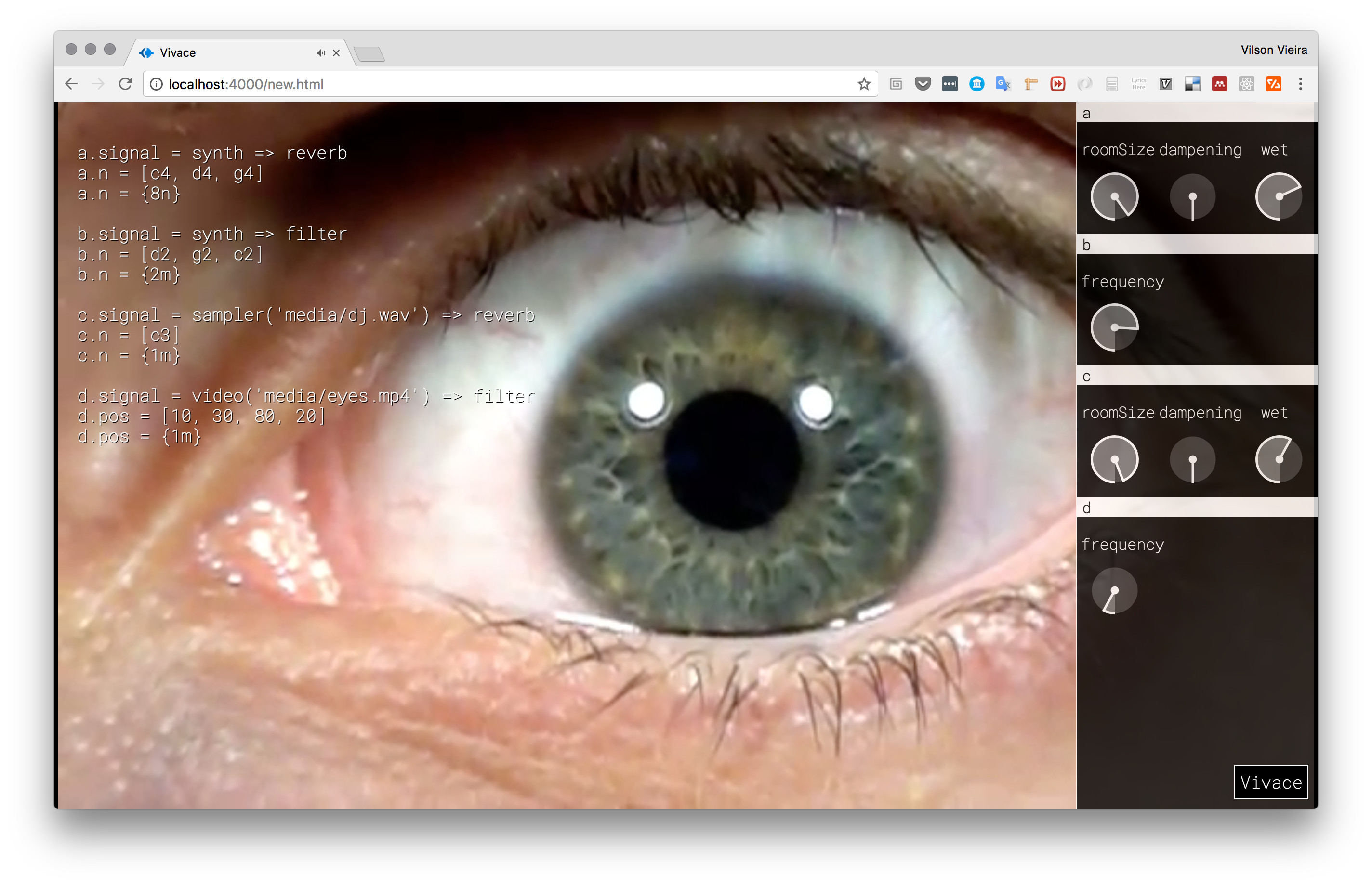 Vivace aims to be easy to learn and use by providing a set of features:

OK, but what is live coding?

Live coding is an alternative way to compose and play music (or other media) in real-time. The performer/composer plays on a computer device and shows your screen to the public, making them part of the performance and at the same time demystifying what the musician is really doing to generate that weird sounds. Live coders commonly use general domain languages or create their own computer music languages.

Vivace is based on a declarative paradigm: you tell which params you want to change from a voice; what their new values are going to be; and for how long the values are going last. That’s it.

For example, that’s a “Hello, world!” in Vivace:

Where a is the name of some voice. Every voice has a signal param that defines voice’s timbre. In this example that’s a simple monophonic synthesizer. Another default param is notes. Every param accepts two types of lists: values and durations. In this case, the list of values [d4, e4, c4] will be played in order every one measure, defined by the list of durations [1m].

A voice can be any name, like a, b, foo, drum303. You don’t need to declare a voice, just use it while defining a signal and it will be automatically created.

Every voice has a default parameter that must be set before anything else: the signal. You can’t play a voice without having an instrument, right? Just define a signal using the chain operator => and the names of the audio nodes you want to chain together:

In this example you are creating a monophonic synthesizer, plugging it to a filter and then to a reverb. You can try other chains like:

Note that some audio nodes in a chain can have parameters like the name of an audio file to be used on sampler.

In this example we are changing the frequency of the filter audio node. We do that using values and durations lists:

Instead of specifying individual notes, it’s posible to define a scale for a voice and then use degrees to play notes into the scale:

It’s convenient to specify the root of the scale to make degrees relative to it. Scale degrees can be specified using Roman numbers (e.g. i, ii, iii, etc) or integers:

If only a root note is specified without an scale, the list of notes becomes a list of semitones defining a sequence of intervals from the root note. For example, the following voice has as notes the 0, 1 and 2 semitones of distance from E4 note, or in other words, this voice will play the unison, minor second and major second intervals of E4:

Vivace uses Teoria.js to handle scales. Those are the supported scales:

Videos can be manipulated by defining video as a node into a signal chain:

Videos accept pos as a default parameter which specifies at what position (in seconds) video should start playing. It also expects a duration list, specifying the duration of it. Video playing is synced with Web Audio API’s internal clock, so both audio and video playing are in sync.

It is possible to route audio stream from videos through audio chains like we do with any audio node. Just route it with the chain operator =>:

To toggle UI controls, click on the Vivace banner on bottom right of the screen or press Ctrl + ] (Cmd + ] and Alt + ] also works). Click (or press Ctrl + ]) again whenever you want to hide/show it.

Everytime you create a new voice, a UI panel with controllers will be created on Vivace’s drawer (the panel on the right).